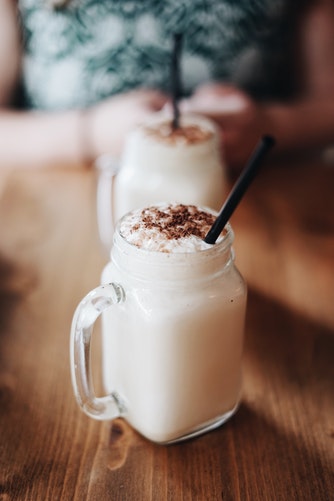 Drinking de-caff coffee. It’s like having sex with a condom – what’s the point? Not that I want to start promoting unsafe sex but if I am brutally honest no one enjoys the rubber friction do they? (Rhetorical question.) I mean, it still feels enjoyable, it’s sex of course it’s going to but you lose that ultimate feeling you get from intense, raw and pure unprotected naughtiness or closeness depending on the situation being casual or romantic. Comparing the two, no wonder coffee is seen to be an aphrodisiac with it’s seductive and sensual aromas. Speaking of which, I found a new blend of coffee just a few weeks back that made me shake with sheer delight. Want to hear more? Of course you do…

I’m a latte girl. That’s what I ordered. I like it smooth, creamy, not overpowering yet completely satisfying my hungry urge for the fix I need. Checking my phone I saw I had received a text from someone I had the pleasure of working with once upon a time. After a friendly conversation about energy drinks the subject turned to the strength of caffeinated beverages that we enjoyed the most. That said, and it being a while since we had had the pleasure of one anothers company, we decided to catch up over coffee as we both agreed we really fancied this idea. Avid fans of the many varieties on offer we spoke further about what we wanted to try out and if we dared to try something a bit stronger than our usual choices. Turns out that was just what would happen.

Two days later I find myself parked up outside a quaint little cafe and being greeted by, who I now call “Mr Wednesday” purely for the fact we met on, you guessed it, a Wednesday. As I walked in I felt nervous, I wasn’t used to spontaneous catch ups to sample the many delights a new flavour of beans can bring to oneself. The concept was indeed exciting I couldn’t deny that, and I was very much looking forward to allowing him to taste the bean I sugar coated for him before I departed. Spotting him laying on the leather couch hidden in the corner I continued to make my way over, feeling rather flushed about this rather random exploration. Him and his masculine self stood up to greet me, looked me in the eyes and whispered “I guess we should just crack on.” With that we did.

Lifting the cup to my mouth I felt the soft, warm feeling flood my lips as I savoured the perfectly heated Cappuccino that met them. Feeling slightly less nervous I thought I was brave enough to try something stronger. I looked at the menu, deciding exactly what would work to just compliment the kiss of the Cappuccino. Hmmm, still eyeing up what was on offer I needed something hotter, something with more heat. An Americano. The warm up before hitting the hard stuff. Making our decision we both went for this, saying no to the cream and having it in it’s bare state. The effects of the Cappuccino had kicked in and the scent of the latest cup was driving me crazy, it was seductive. After partaking and spending an enjoyable amount of time appreciating the fine Americano blend we both dived in to order the double espressos. The climax of the two shots just propelled into a mind blowing rush of caffeine, gradually leaving my body as I calmed down. That was one hell of a strong hit.

Leaving the little cafe that had so nicely hosted us for the few hours spent sampling the many diverse selections of coffee, I returned to my car to head home.

Shocking really how tired you can feel after being pumped full of caffeine of an afternoon.

Bella’s bit on the side